WARNING: THIS REVIEW IS MY LONGEST YET.

The wonder of hearing ̶ and watching ̶ a full orchestra bring these scores to life is something I will never forget. I am so happy that you get to experience this, too. I could not be more grateful to Michael, to all the brilliant musicians who originally brought these scores to life, and to those equally astounding artists playing here, live, tonight.”

Well. Hullo again. I confess my energy level isn’t quite back up to par yet. What my brother said is true: our San Diego excursion has ended. How was it? Honestly, our suffering in San Diego this past weekend remains heavy on our hearts. (Hey, YOU try wandering around the city surrounded by those lucky  people with their Comic-Con badges shining upon their bosoms while you remain the wishful outsider.)

All right, all right. Perhaps I exaggerate.

Being there was . . . smile-inducing, at the very least. The atmosphere alone during our jaunt around the Gaslamp Quarter had been enough to invigorate the soul. Rivers of people, dressed in sundry fan-driven regalia, flowed across the streets. Some stopped and bunched around the cosplaying stars for photos. Others rushed past, urged onto the next event (i.e. dinner). Everywhere were superhero T-shirts, faux wings, wigs, capes, and colored contacts. For a person who has always loved Halloween, cosplay is a god-send (because why wait for October 31 to walk around in disguise?).

Ah, but what this post must focus on now is the event we attended on Saturday evening, July 26, 2014 at the Embarcadero Marina Park South.  For those unfamiliar with the area, the park is connected by a thin land bridge to the shore that the (gigantic) Convention Center dominates. On three sides of the park lies rocks, water, and boats. Arriving at 6:45 pm and watching the sun set right before the show began at 8:00 pm was a beautiful start to the night. 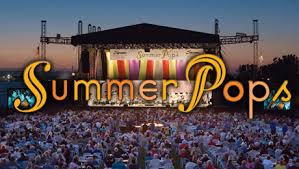 And what a beauty it was, to attend the Ashford University Summer Pops Special Concert Star Trek (2009) movie presentation with live soundtrack performed by the San Diego Symphony. (It was actually the last of three, preceded by the live Video Games concert on Thursday night and the Danny Elfman tribute on Friday night.)

Before the show, a female Spock triumphed over a little boy’s approximation of Captain Kirk to win the costume contest. Afterwards, the crowd’s anticipation eddied upon the green lawn. Last minute bathroom runs, overpriced food and wine purchases, and the chasing down of toddlers to take their seats dominated the milieu.

And then the stage lights brightened, the musicians took their seats, and quite suddenly, John Cho is strolling up to center stage. Applause and cheers erupted, for the show was but a couple speeches away (and because, yea, we like Sulu’s actor). He reminisced about his time working on Star Trek in 2009 and segued into his introduction of composer

The audience went wild when he appeared on stage, and why not? If you’ve seen the Star Trek reboot under director J.J. Abram’s excellent command, you’ll remember that it was even more skillfully scored by Michael Giacchino’s outstanding work. I bought the soundtrack immediately after seeing the movie and still listen to each and every track as if I were aboard a Federation starship myself.

The music was (and is) . . . majestic. That word alone cannot suffice. Indeed, all the words I may write here on this little blog post will not suffice in fully conveying to you how (literally) awesome this concert was. If it had not been for my energizer bunny of a son, I probably would have sat glued in my plastic lawn chair, still and starry-eyed, and utterly fascinated.

Simply watching the movie again with an audience just as excited as me made me incredibly giddy. From the first measure of the emotive main theme onward, there were clapping and cheers, as if in welcome of the sight of one’s home upon the cresting of a hill (or the sight of the Enterprise upon clearing the Earth’s atmosphere). Each main character received the same treatment, and would have received it even without us being encouraged by Giacchino to do so. (In fact, we were also urged to ‘boo’ for the bad guys, but no one did—not when we love the antagonist’s musical refrain just as much as the good guys.’)

Overall, the live performance was spectacular and inspiring. Unlike in a theater, I could better make out the levels of percussion, the strains of the harp, and the strength of the flute. I could feel the brass beating at my chest, moreso than any trumped up bass on headphones. During the heroic action scenes, I pulled my eyes away from the screen to watch the string musicians’ arms bow back and forth in synchronous sway, rising and falling like the waves of deep sea. I marveled at how such movements on delicate horsehair strings could still seem so powerful, so grand.

Through it all, highly-coveted composer and conductor David Newman (from films Matilda and Serenity, and many others) sculpted the melodies with impassioned gesticulations. His hands and arms spoke a universal language, soft and flowing in one moment, harsh and demanding in the next. He was the orchestra’s captain. (He even donned a gold shirt after intermission and finished the movie dressed as a Starfleet captain!) And he was never too early or too late bringing in the music; I cannot fathom the time it takes to develop such a skill.

*Sighs* In the end, I am but a fan, an amateur in concert attendance. I may have taken piano lessons in my formative years, and lent my alto voice to a choir through high school and college, but I feel as though I can only admire the tip of the iceberg. Nevertheless, I know the bulk of it lies underneath the waterline, and I know it is to be venerated, and that is enough for me. Well, that, and continuing to attend concerts and buy soundtracks and gush like an idiot.

If you have been swayed by my clearly very biased—but oh so not unfounded—review and find yourself rueful in having missed this concert, do not fear. Next year, the San Diego Symphony (and the wonderful SACRA/PROFANA chorus) will be back!!!

Yes, next year, they’ll be doing Star Trek Into Darkness (2013) live. AAAHHH! *Writing that on my calendar.*

A few notes for those who want to go:

Any other questions can be found on the Symphony’s FAQs page. Oh, and one last thing, if you want a full view of the elevated orchestra, try a more central seat or bring binoculars for the grandstand area. I so wanted to catch a glimpse of the erhu that plays the Vulcan theme (ahmigawd incredibly heart-wrenching), but alas, we sat too far stage left to do so. (It’s okay, I still got to HEAR IT!)

Holy crap; I’m pretty invigorated now that I’ve typed all this up, so I’m gonna go listen to the entire soundtrack. Again.

ASV Villainy Rating: WF — Or maybe just “IF” for “I’m fucked.”
Personally, I cannot stand against masterful music. If ever there was a way to control human beings, it’d be a chip inserted into the brain to play theme music throughout one’s life. To quote T.S. Eliot (The Dry Salvages, 1941), “…music heard so deeply, / That it is not heard at all, but you are the music / While the music lasts.” (Mine is perhaps a different angle of interpretation of those lines than most would extrapolate, but just go with it.)

3 thoughts on “San Diego Symphony: A Taste of the Final Frontier”