This Thanksgiving season, Walt Disney Animation Studios presents us a solid family movie about a pre-teen prodigy and his best friend, an inflatable (and hilarious) healthcare robot named Baymax. Together, they and four friends endeavor to stop a new threat to San Fransokyo (yea, you read that correctly). How? By becoming superheroes.

Big Hero 6 (2014) offers breath-taking animation—crisp, clean, incredibly convincing textures—and an . . . average plotline, I’d say. Although a bit heavier on the choice of life lessons than I expected, the movies makes for a great opportunity to speak with kids (hey, and other adults as well, if you like; not judging here) about family, loss, and how one deals with it. Determining underlying themes and motifs are for adults though. Young children, I’m sure, will love this movie simply for the superheros. Whoo!

(Okay, forgive me here, but firstly, I’m noting for the record that I am not reneging on my Interstellar review. That one’s still in the works, and you’ll find out why when you read it. I just happened to watch this movie today and since I’m working tomorrow and the day after, I thought I’d stall start with this one first.)

One of the civilians-turned-superheroes in the movie, a comic fanatic named Fred, admits frankly that Big Hero 6 is an origin story wrapped around a revenge story. In fact, most of the humor maintains that steady, tongue-in-cheek feeling throughout the 102 minutes of film.

The protagonist, a 13-year-old called Hiro Hamada, is a techie genius with a penchant for building fighting “bots.” However, he lacks purpose and ambition. This situation, changes, of course when his brother Tadashi introduces him to Baymax. Baymax looks like that one robot Weebo from Flubber (1997) but with an inflatable body attached. He’s also much nicer, lacking any sarcastic programming. No, the part that makes him adorable is his innocence, exempli gratia when he calls the cat Mochi a “hairy baby.” 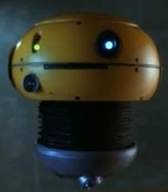 Anywho, tragedy befalls the Hamada family and Hiro’s invention (tiny robots controlled by a neuro-cranial transmitter) is supposedly destroyed. Surprise, surprise, but the bad guy actually staged the calamity in order to steal Hiro’s ‘bots for his own use. (And to be completely honest, the Kabuki mask he wears legitimately freaks me out. Like, if I saw just that mask floating in the darkest in front of me, I’d probably scream and run for my life. But I guess that’s my problem. Ahem.)

The story starts out strong but I felt it ebb halfway through. Perhaps it was the fact that Hiro’s four friends don’t show any common sense. (BTW the 6 in the title refers to the six heroes: Hiro, Baymax, and the four others; pity me, for I somehow did not get this before I saw this movie.)

For god’s sake, they attend a university, which means they’re all at least 18. Yet suddenly this 13-year-old boy tells them that Kabuki guy needs to go down for what he did and they follow him without even an attempt at contacting the police. Okay, so Hiro did try to beforehand—by himself—but you’d think college students would know better than to decide emulating Iron Man is the next best plan of action.

Right. Children’s movie. Got it. Moving on.

That said, the scenes between Hiro and Baymax are great. Like I mentioned above, the robot not only inspires the most humor but also the most emotions when paired with Hiro. Those two form the central storyline and character development. In fact, you could probably ignore the others and be fine.

Scott Adsit (30 Rock, The Italian Job) was the one to breathe life into Baymax (with no little help from the animators, I have to add!) while Ryan Potter (Supah Ninjas) did the same for young Hiro Hamada. They’re a touching pair, really, and their interactions form the bulk of the theme about family loss, as previously stated. Even my toddler teared up at the end (yay, he’s not a sociopath!), and he’s THREE. And when a three-year-old whispers, “Oh no! Don’t go,” and freakin’ sniffles during the story’s climax, you know the movie conveyed the touching topic quite well.

Other voice actors of note in this movie are T.J. Miller (How to Train Your Dragon, Silicon Valley, Cloverfield) as Fred, Jamie Chung (Sucker Punch, The Hangover Parts II and III) as Go Go, Damon Wayans Jr. (Let’s Be Cops, New Girl) as Wasabi (“I got wasabi on my shirt one time!”), and Genesis Rodriguez (Identity Thief, Man on a Ledge) as Honey Lemon.

Also, there’s Alan Tudyk, who voiced Alistair Krei, the main suspected baddie, but if I have tell you who Tudyk is…well, we can’t be friends anymore. That’s it. Sorry.

Overall, for an adult, the movie was very light, the plot falling on the side of unrealistic, but again, kids’ movie. It’s not like every superhero story can boast the prequel foundations of The Avengers (2012), and Big Hero 6 plainly knew this.  Its strength was definitely more in its animation. I caught myself watching the background much more often than the characters. Can’t fault the studio for that, of course, due to the Uncanny Valley Effect.

Rating: Again, good family film. Hold your toddler during the scary parts, though, okay? While they still need you for the comfort, that is. And for bigger kids, discuss it afterwards. It’s not every day you can broach the topic of a loved one’s death in a no-pressure context. Not your cup of tea? Ok, just watch it for the action then. There’s plenty of it, and all of it quite fun. C+

ASV Rating: Hmm, well, I’ll be generous and say the six of them could pull off M-Megalomaniac given their intellects and inventive skills with robotics and chemistry, but as a team, they’re still too new to cause much mayhem. We’ll see if there’s a sequel, I guess.