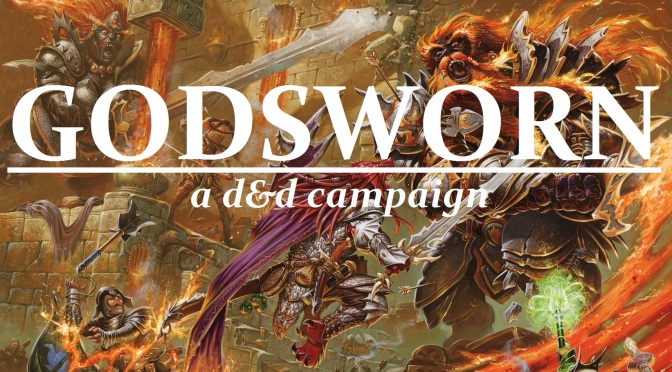 Note: Please ignore the fact that this session was played about a month ago.

Alycstair examined the pack of supplies near the still-roaring fire. They were waterlogged. Azai examined a sword left carelessly on the ground while Lo-Kag picked up an unused torch.

“Why would someone leave all this here? What happened?” Alycstair wondered aloud. After walking for an hour underground, he had been relieved to see the fire at first. Now, it unnerved him.

“I think I see the way out!” Rapha called out from below. Alycstair, Lo-Kag, and Azai walked carefully to the edge of the raised plateau where the camp had been set up. Lo-Kag and Azai squinted with effort trying to spot their elven companion, but Alycstair’s sharper vision, now free of the disguise, spotted Rapha easily.

Rapha stood in calf-high water and waved to the group. He pointed down a bend in the tunnel.

“I can see light!” Rapha called out.

Alycstair noticed something odd, however. A section of water seemed to be flowing straight at Rapha, who noticed it at about the same time.

“What in the nine hells…?” Rapha muttered. The water bubbled and gathered around him. Disturbed, Rapha leapt out of the water as fast as he could. The water rose after him, but could not catch the nimble elf. The living water receded and formed itself into a large cube about 10 feet on each edge. It advanced toward the party.

Alycstair stopped wondering what had happened to the pack’s owner.

This session was mostly filler due to lack of planning on my part. However, I made good use of what I had. The map I used was the one I had made months ago as the destination of the Goldheart Blacksmithing “side quest.” I removed most of the objects and replaced them with a crude campsite.

The only new asset I made was the gelatinous ooze monster, an elite monster from the monster manual. In our previous campaign, our characters nearly all died to one of these. I didn’t want it to be that difficult, so I decreased its movement speed to 2. In hindsight though, I should’ve known that Rapha would’ve been able to detect it, and so the party would be able to safely engage it at a distance.

During the fight, I knew the ooze would just simply be too easy, so I came up with a new mechanic.

The living ooze had taken countless hits from magical bolts of energy, telekinetic blows, and razor-sharp arrows, and finally it stopped moving. Lo-Kag relaxed his grip on his sword and shield. But only for a moment.

The gelatinous cube began to boil and rupture. It flattened slightly and then split into four separate pieces. Each piece spread out, covering more area and cutting off escape.

The resulting battle consisted of the most movement I had ever seen in a D&D battle. Alycstair and Rapha drew two of the cubes away, but the other two remained close to Azai and Lo-Kag.

Azai used his powers to pummel the ooze, but its gelatinous form simply sprung back into shape. Once it was close enough, a chunk of the ooze flew from its body, wrapping around Azai’s ankles. Azai lost his balance and fell to the ground.

Thinking quickly, he extended his hands and used his powers on the closest thing he could find: the sword he had examined earlier. With practiced precision, he manipulated the sword so that its cross guard caught on his robes. His eyes glowed and the sword, through his powers, dragged him away from the threatening ooze.

Ah, creativity. If decisions are the core of D&D, then creative solutions are the mantle. Or something. Metaphors suck. With a little more fighting and maneuvering, the four oozes were defeated and the party moved on.

After exiting the cave, they came across a nearly destroyed town. Many buildings were burned, but the general store still stood. Inside, they found a girl whose parents had been captured. After grabbing some supplies and reassuring the girl, the party moved on, following the glow of their tattoos (from Mystra).

At that point, I had run out of ideas and decided to continue with a little “filler” instead.

The party stood at the sign staring at the two fairies. The sign claimed that one would always tell the truth and the other would always tell a lie. Two paths stretched behind them. The sign claimed that one led to unimaginable danger, and the other led to safety. The fairies would answer only one question. Undaunted, Alycstair narrowed his eyes and slithered forward.

“Show us the way, or I’ll rip those wings off,” he said. The fairies fluttered behind the sign and shook in fear.

“It w-was j-just a joke!” the red-colored one squeaked.

“You think leading people to their doom is funny?” Rapha said. He moved further around the pair of fairies to surround them.

“You’re the f-first ones! We swear!” said the blue-colored one.

“Perhaps you could make it up to us…” said Azai. He glanced at Rapha and smiled. Rapha returned the smile.

“Come with us. We’re trying to stop Asmodeus’ forces up here on the mountain,” Rapha said.

“What!?” exclaimed the red fairy, “But that’s where the danger path leads!” Rapha retrieved a bottle from his pack.

“You can stay in here,” Rapha said. He pulled the bottle’s cork free. “You’ll be safe, I promise.” The fairies looked at each other for a moment and slowly floated into the bottle.

“Okay, we’ll be ready if you need us…” The blue one said. Rapha nodded and corked the bottle. He then returned the bottle to his pack. As he finished, Azai approached him.

Complete improvisation at its finest. Or funniest. .

With that, the party continued climbing the mountain in pursuit of the Tablet of Fate. Catch the heroes next time as they grapple with the forces of EVIL!!!