You remember those days of elementary school, rushing home to catch Toonami on Cartoon Network before your father returned and caught you in front of the TV instead of doing homework? Oh, was that just my brothers and me? *looks around* Riiight.

Ahem, well, come along with me here, because one of those forbidden afternoon shows was Tenchi Muyo!, a journey into what my brother dubs “sci-fi at its very greatest.” Where else would you have adorable little fluffy cat-rabbits morphing into gigantic pointy spaceships? 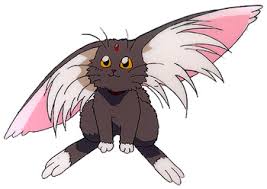 Ah, but that’s not all Tenchi Muyo! is about. But how to condense it into one explanation?

Tenchi Masaki is just a regular 17-year-old, you know, living up on a hill in the countryside with his father and grandfather. Peaceful, lovely. Until a series of events brings a cyan-haired cave demon-slash-space pirate, two Juraian princesses, two galactic officers, and one whack-job mad scientist to live under his roof. Oh and each of these females have an intricate and/or tragic past. Sound like Love Hina (2000)? Yea, kinda. But this has outer space and aliens bent on wiping out Juraians for their power, which is undoubtedly better. Um-hmm.

Quite honestly, Tenchi Muyo! — the dubbed version on Toonami — came at a time when I cared less about substance and much more about identity (hello, teen years, I shall not miss you). So naturally, anime was my niche, And let me tell you, god, the original Tenchi Muyo: Ryo-ohki (that’s the cat-rabbit) OVA series was da bomb. It was only later that I learned the dubbers in Pioneer painted swimsuits onto the women during all the bath scenes (the nosebleeds definitely came to make more sense without them).

This series gave you action, and a generous helping of humor, and magic red beads of power, and a kick-ass busty pirate named Ryoko who bickered with spoiled princess Ayeka while her more mature yet younger sister Sasami played housewife and mediator. There was clutzy blonde Mihoshi and her put-upon partner Kiyone, and then, my favorite, Washuu, a genius-level scientist with questionable ethics, “mother” of Ryoko, and possible one-of-three goddess? I’m unsure, probably because I haven’t read the manga (I had no money back then for such things).

What I do recall is that Tenchi’s grandfather turned out to be Juraian nobility and that due to his royal blood, Tenchi could also wield the red beads of power (as lightsabers!). He goes on to become the girls’ defender and overall confidante and friend. In return, each of them develop a certain fondness for him (or in Washuu’s case, a desire to experiment on him). So on and so forth. It sported a multitude of character archetypes, silly faces, and zero-gravity adventures that I’ll always love.

Ahhh, basking in this nostalgia’s gonna end up in a bad way, namely, my staying up all night to rewatch the OVAs and finding out where the series has gone to these days.

Thus, for those who are inclined to join me, here’s a bit of background: Tenchi Muyo!, translated as No Need for Tenchi, or more on the punny side, No Need for Heaven, encompasses an anime series, novels, and manga by Masaki Kajishima and Hiroki Hayashi. Here’s the list verbatim from the Wiki page (to save time on links):

Not included in that list are the spin-offs, such as Magical Girl Pretty Sammy and Tenchi Muyo! Mihoshi Special.

Oh and if you’re wondering about the movies, they’re not bad. Forever was a bit mature for me at the time I watched it and it had different animation . . . I don’t know. Let’s just say I sold that one and kept In Love.

I found the first OVA episode on YouTube. Have a go. For the classically bad dubbing if nothing else. You can also find Tenchi Muyo GXP‘s first episode on there, as well as Tenchi Muyo! War on Geminar.

And that’s it for my first try at Throwback Thursday. Hope I triggered someone else’s good ole days as well as mine. Tell me what YOU remember most about this anime/manga. Here’s to Tenchi Muyo! and the ball of pure fun it is. Cheerio!

Bonus pics of Ayeka’s guardians, Azaka and Kamidake, who spend much of their time as . . . logs.